A downloadable game for Windows, macOS, and Linux

Welcome to our Spaceship newcomer. As you already know, we are in a tough situation and in need of more soldiers. But we also need mechanics, that's why you're here.

You'll have to build the most efficient ships you can. Don't forget that their lifes are the ones at stake.

Bitcredits wisely to buy the best parts to your ships.

You will also have to manage your

Scraps, so that you can build better spaceships for our pilots.

Sometimes your pilots can die despite of your efforts. Unlucky events happen. Don't blame yourself for all of that, just try your best and keep working hard.

(Don't be afraid of reporting bugs in the messages or comments! It really helps improving the game in the future)

Thank you very much for another wonderful game (I really enjoyed the Saloon Keeper in the past)!!

I think there is a minor typo in the English version of Space Crafter, probably should be "put" (the gun), not "but": 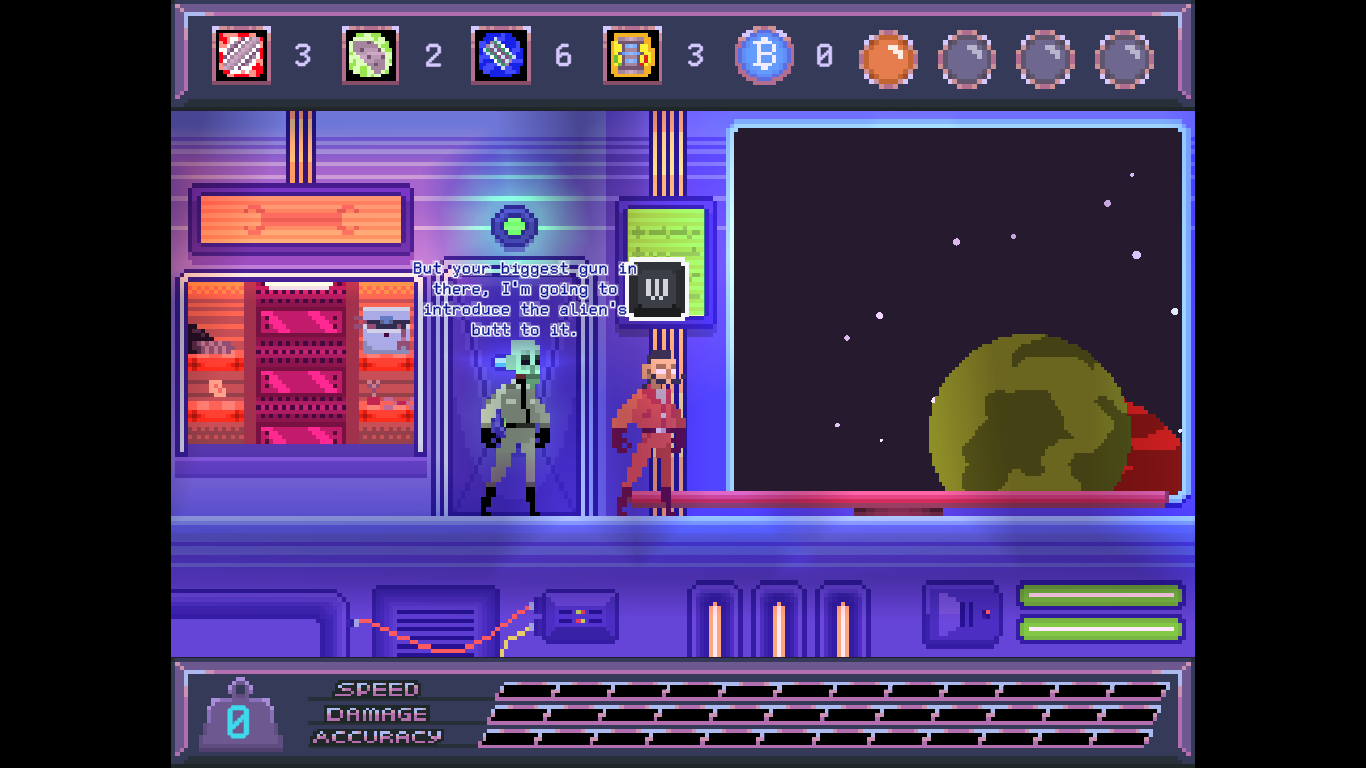 Hello! Thank you for your support and feedback! I'm very grateful for that.

I fixed the typo in the new released version.

May I propose to make more content for this game (for example, weapons, modules)? I find the story/plot wonderful and strongly believe the game has a major potential!

Thanks for your fondness for the game Mark! I'm currently working on my next game called "Rock Star Manager", that's why I'm not doing many updates on Space Crafter.

There was a bug right at the beginning if you press W: 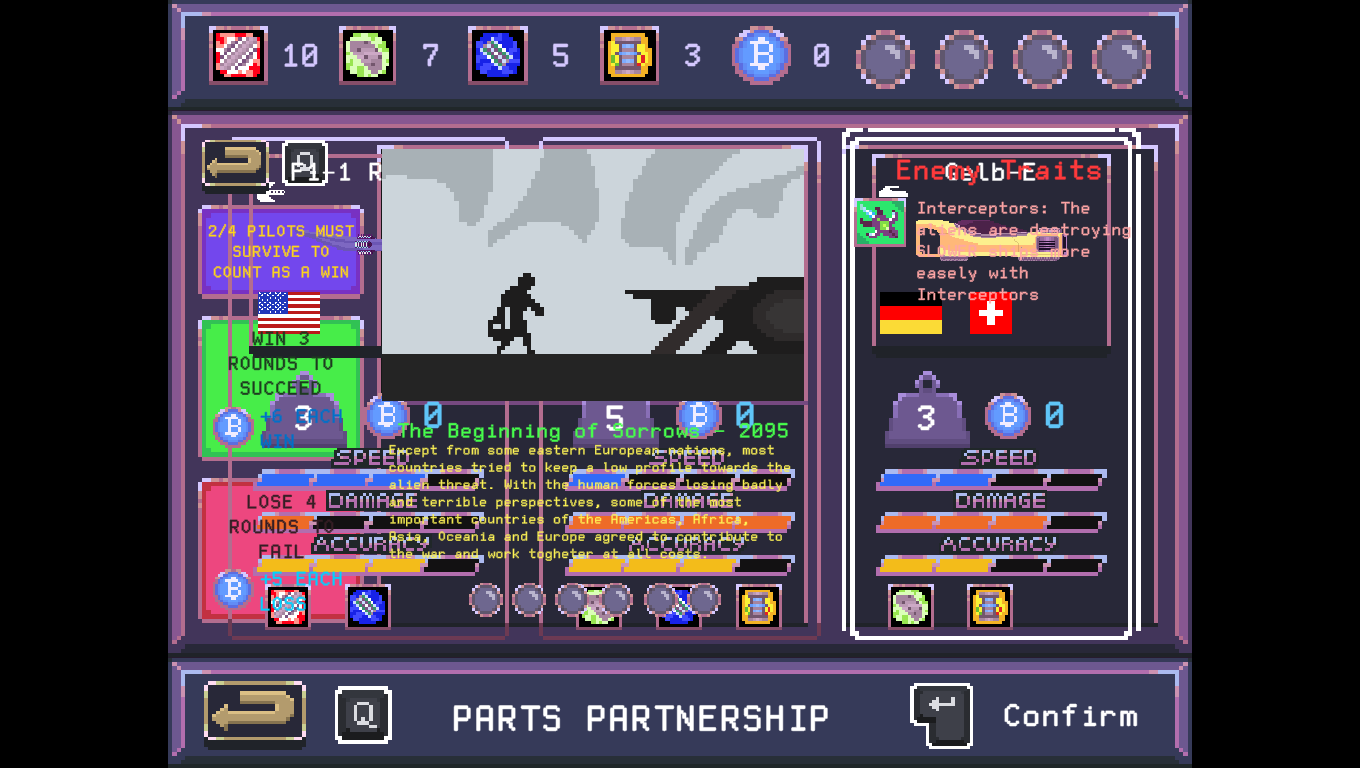 I believe the bug is because you are standing at the fat guy’s window while in that menu, but your key inputs are not restricted, so one menu actives in top of the other.

Besides that, the game is awesome. I think if you keep polishing it, maybe streamlining the ship building process, it could turn out great. It is from time to time a little bit tedius. Maybe walking faster when carrying things. I Think the game would benefit greatly if you add mouse support during menus and some tooltips to icons and stuff when you hover over them.

Another thing: I won the first wave and by the second I didn’t have enough bitcredits to purchase anything and options are too limited. You have to either provide parts for all budgets or balance the overall economy of the game so you can still make progress even if you are on a low budget. I mean, I lost two fights and won three and i ran out of resources almost. The bitcredits earnings for winning are to small compared to what you get if you lose. Maybe stretch them apart a little bit more, like +10 for winning / +5 for losing and a chance to win/retrieve scraps if your ships returned damaged or something like that.

Thanks for your feedback Paul! I'll take it into consideration for future updates!

Thank you for taking the time to write a feedback! We added some changes to the game to give the player more control, check out our last Devlog for the 1.2.0 patch.

Well the problem was certainly catered to be dealt with  but  I have nothing to say for now. We shall see what the future shall bring this game. Will it bring failure or a rising performance? That is for the devs to hold. I hope it wont be the former

LOVED the game also expect great things in the future :)

Thank you very much!

Ok time for my review.

Honestly if any player who isn't very resourceful will immediately quit in a few tries. The Idea of Resource management games is to be considerate of the fact that you cant just spend everything in one go but at the same time gives the players a chance to find ways to manipulate that fact to their own advantage. This game gives the challenge but not the chance. What makes this game nearly Impossible to beat is that too many opposing factors in the game are present. For example, the pilots have their downsides which I understand completely but the ratio of that downsides is overwhelming for the average player that It discourages them. But since the lore and situation in the game is given ill give you the benefit of the doubt. Another factor that is a huge downside is the scraps itself. The game is ruthless with the scrap mechanics. Given that all pilots live you will only get around 2 scraps per type and thats barely guaranteed since these pilots are very incompetent. Not only that but the scrapper trait is so rare and even if you do manage to get it its only a matter of time before those resources will be gone in the next day.

This game has potential and I understand its new but this is the situation the game faces right now. My suggestion? well I have a few

-Apply the enemy traits, its a factor that can give the players an advantage and as of now that thing isn't applicable

-Give Intel on the enemies situation, we cant be the only ones taking damage. Give some intel on the situation regarding the enemies damage and such to give the players an Idea on what to focus on

-Apply a scraper collecting factor in the game. We know we cant rely solely on the pilots so there should be an alternative to get scraps. The store has scraps but the price is so high it isn't worth it

I have a few more suggestions but i think these three are what can help the game give a fair chance for the players. Note that management games are supposed to be challenging but its also supposed to give chance to the players to overcome the challenges

Thank you very much for your feedbacks! I'll take it into consideration and will balance the game better, as soon as I make the update I'll let you know! The enemy traits only begin to appear after the first mission, but they're already implemented in the game. 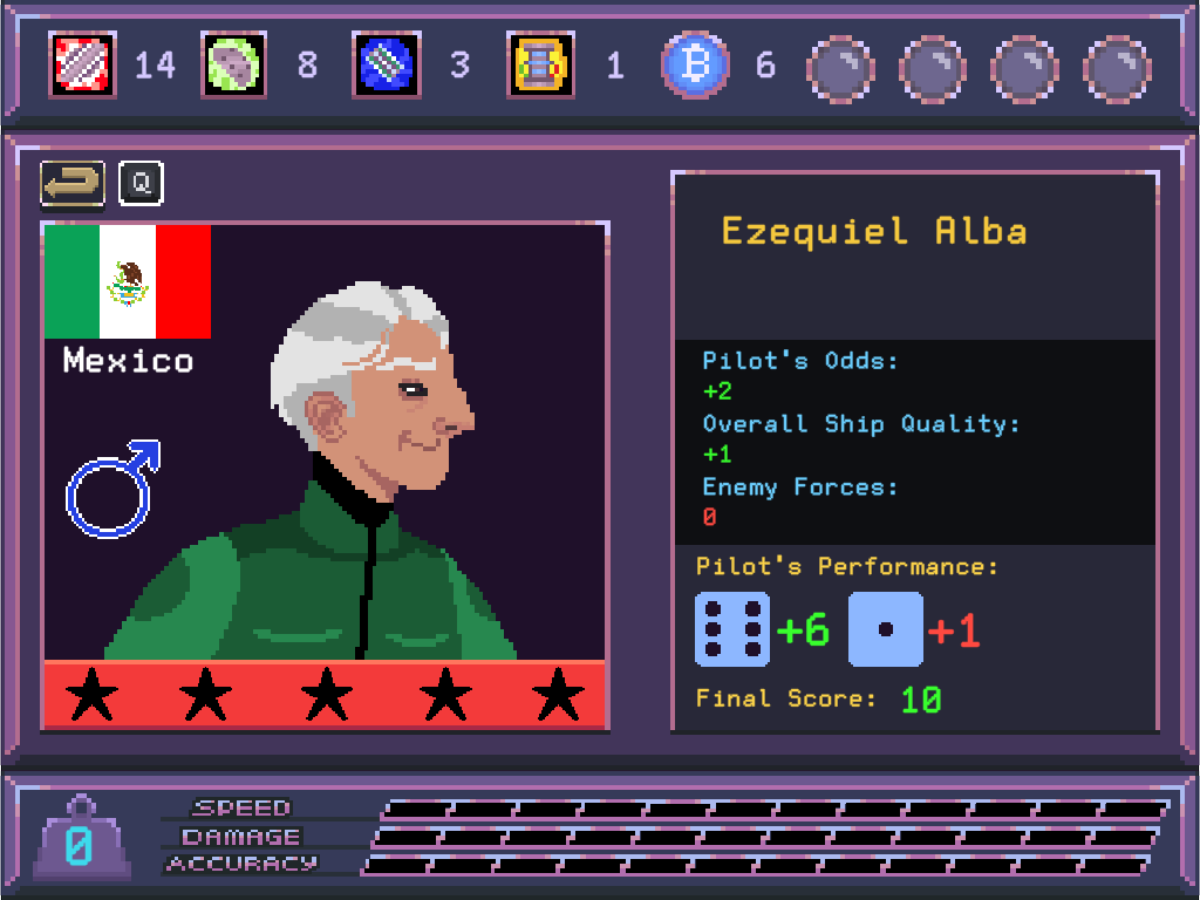 Hello Veznoz. Due to your feedback we added a little screen after all the pilot's are gone, so the player can see their scores in battle to try to improve in the next time. I also added slightly more Bitcredits and scraps after each mission. The new Build also fixes some bugs on the Loading Mission function.

Thank you very much!

Here is a bug for you guys. If you try to skip through the introductory there is a tendency for the game to give a black screen.

I just added a new patch trying to fix this. But I wasn't able to get this black screen yet. Will keep trying to improve the code so it doesn't happen tho.

Thank you for playing the game! 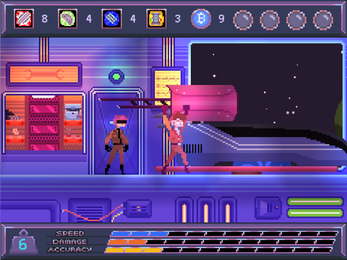 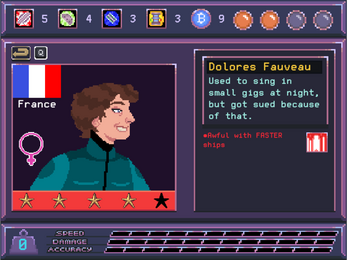 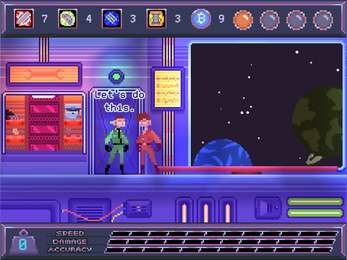 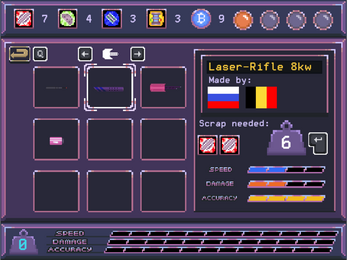 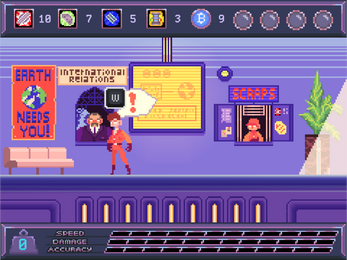